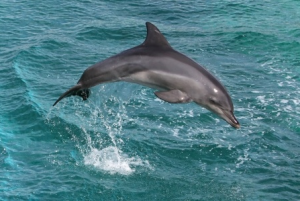 From 1964 to 1967 NBC broadcast a TV show about a lovable dolphin named “Flipper” who would interact with Porter Ricks, the Chief Warden at fictional Coral Key Park and Marine Preserve in Florida. If you ask a person to name a famous dolphin, inevitably they’ll recall the name Flipper, who has also been the subject of several films, including a 1996 one.

Why do people seem to love dolphins so much? Is it just because they’re seen on TV and the big screen?

Dolphins get a lot of attention from humans because they’re a lot like us. Actually, they’re like the idealized version of humans in some ways. Not only are they really, really smart, but they also live in groups and cooperate with each other to get food and raise offspring.

How smart are dolphins? Well, they’ve been observed teaching their young how to use tools. They cover their snouts with sponges for protection while foraging for food. With their whistle sound they can communicate with one another. There’s even such a thing as dolphin culture– and you thought only humans were capable of creating culture, right?

Dolphins are a lot like pet dogs– they’re sociable, playful and curious creatures. And, best of all, they seem to get along well with humans. If sharks are the scary ones of the sea, dolphins are the opposite– the friendly ones.

Interestingly, dolphins exhibit signs of compassion and altruism. They’ll stay and help injured individuals and even help them to the surface to breath if needed. Not only will they help each other, but also humans and whales, too.

Did you know dolphins can jump as high as 20 feet out of the water? They also possess a natural version of radar to find food and to navigate waters.

Would you like to see some dolphins in the wild off Virginia Beach? Call and book your sunset dolphin-watch cruise at 757-481-4545. These cruises run most nights between Memorial Day and Labor Day.